The site of the Spanish founding of Lima by Francisco Pizarro, the Plaza Mayor has witnessed some of the most important historic events in Peru.

Small shops and businesses originally surrounded the Plaza Mayor, or main square. More than a century later, a bronze fountain was built in the center in 1651, and still stands today. It was in this plaza that Peruvians declared their independence in 1821. The Presidential Palace sits on the northern side of the square, while the Cathedral and Archbishop’s Palace are on the east side and the City Hall is located to the west.

built in 1625 in Baroque Renaissance style and rebuilt after an earthquake in 1940, is a veritable work of colonial art. While its facade is somewhat austere, the Cathedral houses magnificent Churriguerra altars, beautiful-carved wooden choir stalls and gold-leaf altars, in addition to a unique collection of oil paintings and sculptures from the seventeenth and eighteenth centuries.

is a striking complex consisting of a church, the convent of San Francisco and the chapels of El Milagro and La Soledad. Built in the seventeenth century, the complex’s cloisters and patios are decorated in blue Sevillian tiles. There is also a well-stocked library, the Religious Art Museum and the Zurbarán Room. The church is built on top of a network of underground tunnels, or catacombs, which were used as a cemetery during colonial times, and today are open to the general public.

is Lima’s foremost tourist and hotel district. It features spacious modern shopping areas, parks and gardens. The district also puts on many cultural events at theaters, cinemas and art galleries, and boasts a pre-Inca mud-brick temple called the Huaca Pucllana, one of many archaeological sites still found in Lima. The district teems with cozy cafes, pubs, restaurants and shops, while its freshly remodeled parks and gardens attract thousands of Lima inhabitants every Sunday who congregate to visit art exhibitions, take in open-air concerts and browse through flea markets.

is Lima’s “garden” district, as it stands out for its green zones and exclusive residential areas. San Isidro also features many of the city’s finest restaurants, hotels and concert halls. Despite the building boom, San Isidro has kept something of the aristocratic atmosphere for which this suburb was known at the beginning of the last century. This can still be clearly seen in the area of El Olivar, a centuries-old olive grove that evolved into a popular park built around ornate upper-scale homes. In recent years, the district has become a major financial quarter as many banks and businesses left downtown Lima to set up headquarters in modern high-rise office buildings. The district features a pre-Hispanic temple, Huallamarca, where concerts and exhibitions are occasionally held.

located 19 miles (30km) south of Lima along the Pan-American Highway, is an ancient temple rearing over the fertile Lurín valley. A sprawling ceremonial center of 18 mud-brick pyramids with ramps and plazas, Pachacamac was ruled by the Ychsma lords from 900 A.D. to 1470. The Inca Empire conquered the religious center less than a century before Spanish Conquistador Francisco Pizarro’s brother, Hernando, plundered the site in 1533 and destroyed the idol that served as an oracle.
The Inca section (1440-1533) is the best-preserved part of the archaeological complex. The site includes palaces, plazas and temple that have been painstakingly restores, and even includes an on-site museum that houses an interesting collection of pre-Hispanic relics.
Archaeologists began exploring Pachacamac in the 1890s but found much of the nearly 1,500-acre (600ha) ruins already looted, and quickly ran out of intact tombs to explore. But not all of Pachacamac’s historical treasures had been sacked.
In 2005, archaeologist Peter Eeckhout, of the Free University of Brussels, excavated 69 tombs and funerary bundles, including some containing whole families. Others held the mummified remains of pilgrims who presumably sought cures from the oracle deity for diseases like syphilis, tuberculosis and cancer.

is actually two museums rolled into one. Its massive Gold Museum will blow you away with thousands of gold pieces, each uniquely sculptured into something different from earplugs to clothing decorations. The Arms Museum at the top of the building is one of the world’s best, with thousands of ancient firearms from all over the world. It beggars belief that some of these clumsy looking old guns were once quite effective.

has Peru’s most extensive collection of pre-Columbian artifacts including 8,000-year-old tools, granite obelisks of the Chavin culture and weavings of Paracas. Ceramics reflect such civilizations as the Moche, Chimu and Inca.

started out as a repository for Chiclin pottery brought to Lima from Trujillo, and today offers some of the finest examples of artifacts from the Mochica period (AD 400-800). Also represented are the Cupisnique period (back to 1,000 BC), and the Nasca, Chimu and Inca periods. A collection of pre-Columbian weaving includes a sample of two-ply yarns with 398 threads to the inch. But the museum is most famous for its extensive collection of “huacos eroticos,” explicit ceramic depictions of sexual acts crafted more than 1,500 years ago by the Moche, a highly organized, class-based society that dominated Peru’s northern coast for 800 years. 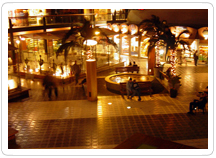 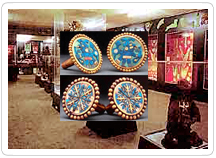