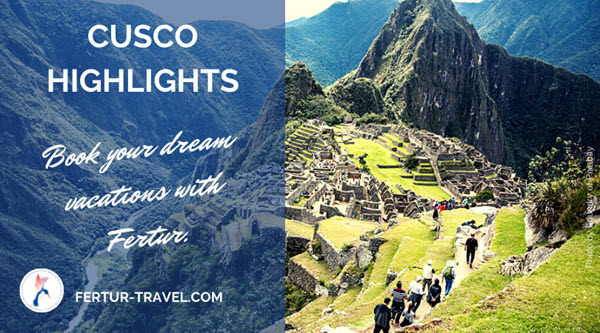 In and around Cusco are hundreds of examples of architectural and engineering marvels. Everywhere there are signs of a Spanish invasion that grafted itself onto the architectural and cultural foundations of an Inca society that was conquered but not vanquished.

Here, in the Inca capital of the Americas, the fusion of Spanish and Andean customs is vibrant, warm and intoxicating. A glorious past unfolds in a landscape of churches built on top of palaces. Lost citadels in the Andean heights are rediscovered by following enduring, legendary Inca trails. The glorious past unfolds in the charm and dignity of Cusco’s proud people.

The past melds into the present in the main square, which the Inca called Huacaypata, in the artisan quarter of San Blas, and in the Convent of Santo Domingo, built on top of the Temple of the Sun.

Visitors will also feel that history come to life on the outskirts of town, in the imposing ruins of Sachsayhuaman and Tambomachay. Visitors can also take part in all kinds of adventure sports and participate in the most spectacular religious festivals on the continent.

Celebrations include Qoyllur Rit’i, which is held on an ice-covered mountain at 13,000 feet (4,000m) above sea level, the Corpus Christi procession and the famous Inti Raymi spectacle.

Or as it is more popularly known, The Sacred Valley of the Incas, was, and remains, southern Peru’s most important agricultural breadbasket – a region steeped in historical, cultural and religious significance. Formed by the Urubamba / Vilcanota River, this lush valley, located about nine miles (15km) north of Cusco offers endless opportunities for adventure and exploration: from white water rafting and bargaining in indigenous markets to visiting Inca ruins and hiking the famed Inca Trail to the citadel of Machu Picchu.

Arguably the most spectacular destination in the valley, is actually two sites: the colonial village beside the Urubamba River and the Inca fortress atop a mountain nearly 2,000 feet (600m) above. The village has a famous, bustling outdoor market on Sundays. One can either drive up to the ruins, or climb a steep footpath that starts at the main plaza of the village. Upon reaching the top, you will find the ruins have overlooks to deep gorges. The fortress tops well-preserved temple rooms and agricultural terraces that sweep down from the buildings.

lies at the other end of the valley. Built primarily as a temple and royal retreat, the sprawling site was also a mighty fortress and served as the staging ground for the only outright victory the Inca won in battle against the Spanish conquistadors in 1536. It was protected by high stone terraces built from giant boulders dragged from quarries nearly four miles (6km) away.

West of Cusco, is another “lost city” perched on a mountain spur, high above the Apurimac River. Reaching the ruins requires a challenging, but spectacular trek that takes a minimum of four days, round trip. Choquequirao means “cradle of gold” in the ancient Quechua language, still spoken in much of the Peruvian highlands. Many experts believe the site was the last refuge of Manco Inca, who led a last-ditch rebellion against the Spanish before retreating into the jungle, where his followers held out for 70 years after the collapse of the Inca Empire.