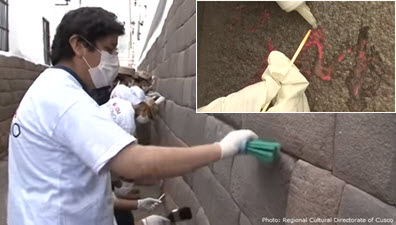 An inspiring thing has been happening along the narrow side streets and plazas in the ancient Inca capital city of Cusco.

For the last seven months an army of some 2,000 volunteers, equipped with special solvents, tooth brushes and hand brooms, have been working under the careful guidance of restoration experts to clean the iconic Inca polygonal masonry walls.

The campaign, now in its second year, is called  “Dale vida a tu patrimonio” (or “Give life to your heritage”). It began in early May and will officially end on Nov. 30.

People from a wide swath of Cusco society lent a hand for the conservation campaign, including elementary, high school and university students, government staff, supermarket workers, construction workers, soldiers and the staff of PeruRail and several hotels. The volunteers had to register and attend training seminars before taking to the streets in small cleaning brigades.  The groups of up to 20 volunteers worked on Inca-era polygonal walls, was well as post-Inca and colonial- and Republican-era constructions.