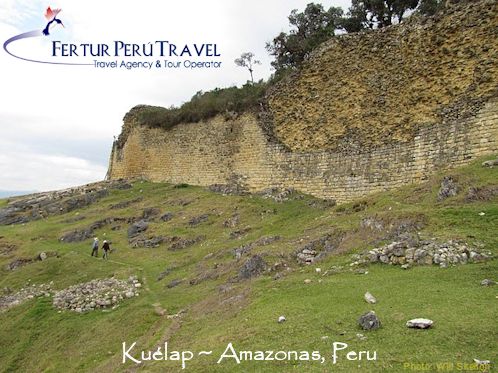 Belonging to the Chachapoyas culture, the mountaintop fortress of Kuelap functioned as a political, religious, administrative and military center. A yellow stone wall rings the complex, measuring 680 meters long, and up to 20 meters high. Above the entrance gate — past bas-relief stone carvings of animals and birds — two stone platforms have been constructed to create separate living areas known as Upper Town and Lower Town. The ruins of 400 hundred circular stone buildings can be seen, overgrown in many places with trees and bromeliads.

Lagoon of the Condors

An archaeological complex composed of 6 Inca mausoleums that take characteristics from the Chachapoyas culture they conquered.

A funeral center that’s built into a cliff-side, and features “chullpas” or houses of the dead, which closely resemble the houses that the Chachapoyas lived in. The adobe and stone construction is painted in a mix of red and white horizontal panels.

The Sarcophagi, know by locals as “Purunmachacos,” are associated with the Chachapoyas culture and are about 1000 years old. They form part of the archaeological complex called Chipuric, and are characterized by the unique form in which the dead were interred. The burial enclosures are connected laterally in groups of between 4 and 8 coffins, with their backs built into the cliff-side.

An archaeological complex constructed from stone bricks, held together by a mud mortar, Yalape was an urban center that dates from the years 1100 to 1300 AD. Belonging the Chachapoyas culture, the site sprawls over 4 hectares, and has low walls, suggesting a residential area with few defenses.

A pre-Inca settlement built into a hillside, unusual for the Chachapoyas, who usually built on top of mountain ridges. The 3 hectare complex sits on the southeast slope of a sharp spur, where five platforms have been constructed to support huts and towers built from stone and mortar. The site dates from 1100 to 1300 AD.

A township built from stone, with blocks worked into symmetrical shapes and placed in position with mud mortar. The buildings date from 1100 to 1350 AD.

A housing complex of circular stone buildings associated with the Chachapoyas culture, with rhomboidal and zigzag stone ornamentation, and prominent cornices in their walls. Like all buildings from this period of Chachapoyas dominance (1100 – 1350 AD), they were built from stone with mud mortar.

A population center built on top of a hill, with the remains of 500 circular houses constructed by the Chachapoyas culture (1100-1300 AD). Notable for the wide expanse of its ruins and its impressive construction techniques, the mortar used to hold the stonework together here is hidden from the naked eye.

A funeral complex of the Chachapoyas culture, associated with the Chipuric style, which along with Revash created the principal burial styles of the culture. The result is the construction of funeral statues in cliffs that are difficult to access.

A series of petroglyphs in high relief, Pitaya is believed to be 3000 years old. The carvings take the shape of 30 distinct types of flora, fauna and hunting scenes, in a field of rocks and stones about 100 meters square.

Located to the west of the Fortress of Kuelap, covering an area of approximately 6 hectares, the enormous complex of Gran Vilaya contains a number of archaeological sites.

A political and military center for the Inca culture, its buildings include a series of stonework porticos and houses. According to studies, the ruins were the seat of government for a group of people belonging to the Chacha Kingdom.

The rock paintings appear in the entrance to three caves, where you can appreciate animal figures that defy the imagination.