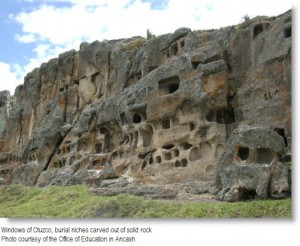 Known by archaeologists as the Necropolis of Otuzco, the “windows” refer to the appearance of the tomb entrances in a series of horizontal rows. The windows have been hollowed out to form square and rectangular chambers, carved into a rocky surface of volcanic origin. Some evidence suggests the tombs correspond to the Cajamarca culture, which had influence in the region between 300 AD and 800 AD.