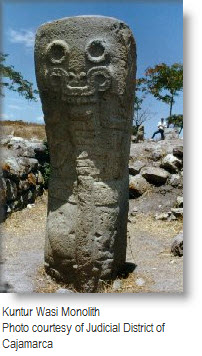 A ceremonial center that corresponds with the Initial and Early Horizon periods, Kuntur Wasi dates from about 1100 BC. The complex rises from platforms and plazas, sustained by stone walls of enormous size. The platforms contain a series of enclosures. In the year 250 BC the complex was destroyed, and the settlement area was then moved to a place named “Cerro Blanco” — the White Peak, which has numerous structures of similar style.