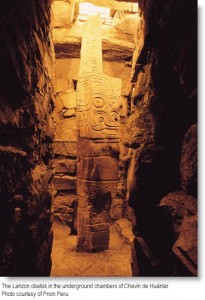 The ancient capital of the Chavin culture dates from approximately 1200 BC until its decline in 200 BC. That era is known as the Formative period. The complex is comprised of a series of massive stone buildings. Their scale and the anthropomorphic and animal designs carved on the walls suggest they were temples. The site is on a flood prone river valley, a problem resolved by an ingenious drainage system. Some experts argue that the rushing water was channeled to create the sound of a jaguar’s roar throughout the temple. Archaeologists believe that Chavin was a pilgrimage site, and at least as prominent in its day as Cusco was for the Inca. The buildings are linked by a maze of tunnels and corridors, with strategically placed gaps in the rock allowing an unusual level of sunlight into underground chambers. The buildings have steeply sloping walls, their profile appears pyramidal. It’s evident that these buildings were constructed progressively, with new platforms added to original structures.