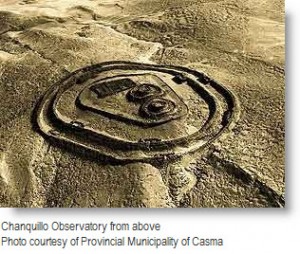 Considered the oldest solar observatory in the Americas, this enormous complex was built in the 4th century BC along Peru’s coastal desert. Composed of three concentric oval outer walls, the site covers 4 square kilometers. The “observatory” is a line of evenly spaced low stone towers — “the 13 Towers of Chanquillo” — that run on a north-south axis along ridge. To the west and east of this line, archaeologists have found two observation points. From these the 13 towers are accurate reference markers to plot the position of the sun and moon at different times of the year.